From Milliongenerations
Jump to navigation Jump to search

The Stone clock project developed into the letters project. Please check there.

The Stone clock project developed into the letters project.

Begin an endless poem with letters in stones on the pavement, a line that slowly winds its way through the streets of the city (or along buildings, or between cities, or...)

Obtain some backing and means that make it likely that the project can continue for at least a couple of years. Convince whoever is responsible for the streets in the city of the plan, or who owns the land. Better: engage them in the project. It could become a tourist attraction as well as a reminder...

Plan a route. It should be likely that the route will still be walkable some time in the future.

A poet / writer / group could conceive a 'slow poem' or story to be published one letter per stone. Ask a group to keep it secret while ensuring it remains available, so it is actually published only with the time passing on the stones. Even ask for an endless poem. A never ending poem. The poets ask successors to carry the work on when the letters of the previous one are published. With potentially some 250 billion weeks to go - one long poem. (If one poet makes a contribution unduly long that risks disinterest and stopping - who would want to be responsible for that?)

Have a batch of cobblestones made of different color with the letters engraved. Make sure replacements for vandalism can be ordered later. Could ask local artists to contribute to the surfaces or the letters or embed something in the stones (makes vandalism and theft more likely, though...).

Replace a cobblestone with another one of similar size but different color/material. That can have its date engraved, or artists could have shaped it, and letters of the endless poem engraved. (Or if there's no street with cobblestones, place a stone in the ground where none yet is, better know how to).

Every week, the same day of the week, say Monday (to strengthen the link to nature and express that things are started early) replace another cobblestone next to the previous one to create a line. Or just engrave a letter in an existing stone. Very slowly, a few meters or feet per year. If your backers have a lot of funds and enthousiasm you might be tempted to do one a day, but be sure you have a reasonable chance to keep it up. One per week is preferable in many ways, it reflects the rhythm of culture). Mark years with an extra or different stone to maintain the link between culture and nature. Maybe set yearstones ahead along the path for a set number of years ahead (not to many, not too few, and keep that moving ahead as years pass lest people think the world will end when the last is reached).

Put a board next to the stones to tell people when this line is expected to go where. (e.g., 'If we continue, in xyz years this will reach xyz')

Ask e.g., local artists or businesses or politicians to sponsor, make or place a stone or a board. Communicate.

The day before it is placed ask people what they think the next letter will be. (easy some weeks, intriguing on others)

Keep doing it for as long as possible and make the project independent from any particular person as soon as possible. If the community around it doesn't want to continue, it will likely die.

Realize that the stone clock is very vulnerable to vandalism, as well as neglect. Repairs to the streets are complicated by the line, and stones wear and might have to be replaced. Broad support might give it a chance to continue.

This was inspired by Danny Hillis' 10,000 year clock and reports (1)(2) about it in The Economist with the thought that human intervention might be acceptable as means of perpetuation. Greg Blonder's TiWalkMe Ten Thousand Year Forest was found later but provides important inspiration and is much closer conceptually. The idea of the (endless) poem was inspired by a meeting and exchange with Ingmar Heytze in 2011.

Obviously, this 'stone clock' line only tells the week rather than the time. The letters of a poem convey the will to culture in addition to the content, the weekly rhythm and yearly marks bind civilization and nature. The will to continue expresses the duty felt to posterity.

In contrast to Hillis' automatic clock, this 'stone clock' also requires people and their will and means to continue to tend to it. It requires continued determination and regular work to keep 'alive', and is thus more similar to the TiWalkMe Escapement, which consists of living plants, adding extra dimensions, but also expense.

To last, civilization, too, might need constant care and attention. It's for posterity that we strive, to pass on our genes, or just in the hope that someone will continue to be there and realize that life is wonderful. The continued effort becomes the monument: not only our effort but the continued effort of those after us. Worth a try.

Similar efforts, to support, build on, cooperate with or be inspired by

efforts similar by name or nature, with different objective

Example of letters engraved in situ, with marks for years next to them: 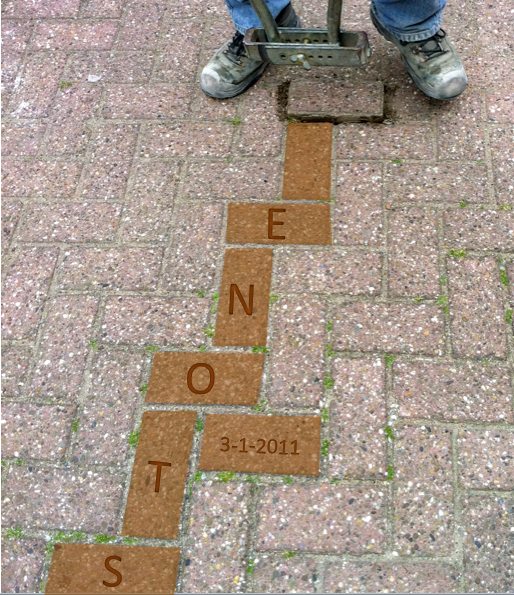